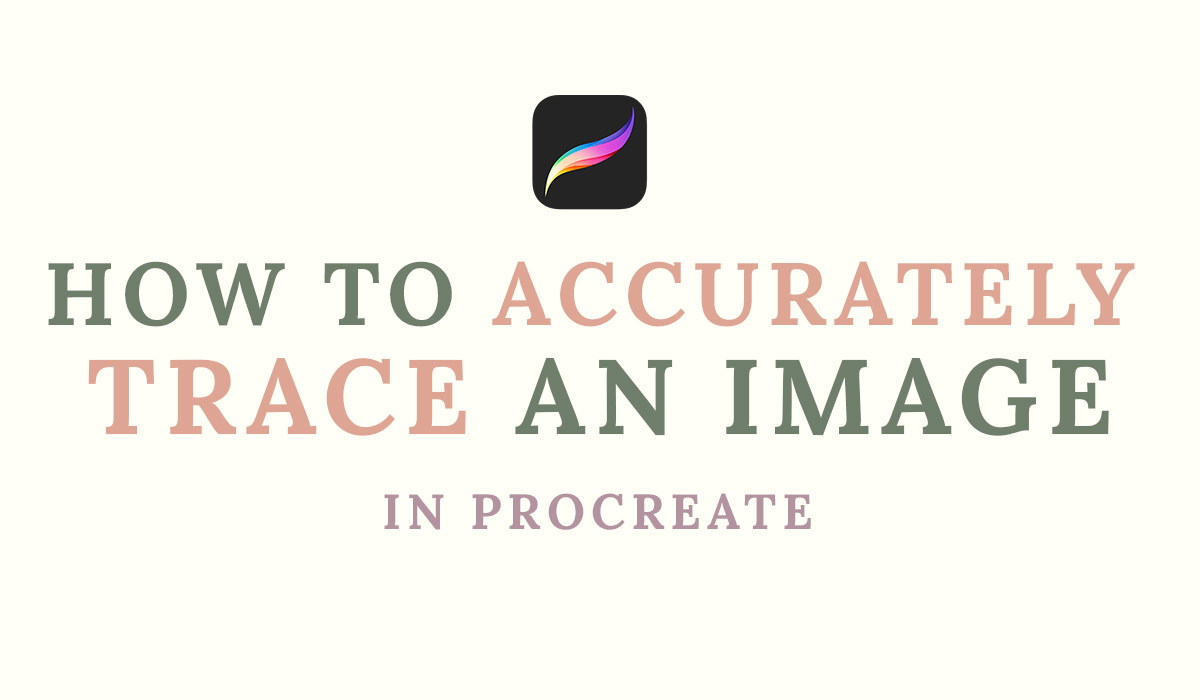 To accurately trace an image in Procreate you don’t need much. Just your image, iPad, Apple pencil and about 10 seconds to set things up.

keep reading to find out which simple steps to take, and which brushes to use!

1. Import your image to Procreate

First, you need to create a new canvas. I assume you already did that, but just in case you’re wondering what Procreate’s best canvas settings are, you can read about it here.

To import an image in Procreate, you:

After picking your image Procreate automatically goes into transform mode. This is where you can scale your image, and place it anywhere on your canvas.

2. Add a new layer to trace on

Next, we create a layer on top of our image layer. To do this, tap the plus icon in the layers menu.

If you’d like to know more about layers in Procreate, you can check this article here.

3. Decrease the opacity of the image layer

To see your linework more clearly you need to decrease the opacity of your image layer.

Tap the N on your image layer and drag the opacity down enough for you to still see it.

4. Trace on your newly created layer

Make sure to select the layer you created to trace on before you actually trace! Believe me, even if you do this 100 times, 80% of the time you start to trace on the wrong layer.

Pick a brush that’s easy to work with. I recommend Procreate’s Technical pen. You find it under the Inking tab in the brush menu. More on tracing brushes later.

After you’re done tracing you can export your drawing, either with or without a background.

To export the line drawing with a background you first need to you need to hide the image layer. Simply tap the checkbox on the image layer to uncheck it.

If you want to export your line drawing without a background color you need to uncheck its visibility box as well.

If you only want your lines and no background you should first, turn off the background layer and then export as a PNG. JPEG does not support transparency, so it must be a PNG.

Lastly, you can save your image in your camera roll or mail it to yourself or someone else.

Now that you finished your linework you can transfer it to any paper you’d like!

Best brushes to use for tracing in Procreate

The best brushes to trace in Procreate are brushes that are uniform, smooth and have no grain. The brush should have no distractions.

The best native brushes in Procreate to use for tracing are:

You can find all of these brushes in the brush library (brush icon) under the Inking tab.

The Fine Tip brush does not react to pen pressure. This way you have a uniform line throughout your line drawing. This brush is also stabilized, meaning it smoothens every wiggly line your hand may make.

The Technical Pen is pressure sensitive. This way you can manually add thicker parts when you press harder. This brush is not as stabilized as the previous brush, making it great for finer detail.

Is tracing in Procreate cheating?

Absolutely not! Anyone who claims tracing is cheating needs to understand the reason why someone traces. Allegedly, even the old masters did it.

If you’re still unsure whether or not tracing is ”legal” read this article right here. If Da Vinci did it, you surely can too!

Can you automatically trace an image in Procreate?

Procreate does not have a tool that automatically traces an image. You can, however, trace an image by hand. For this, you import an image, create a new layer, lower the opacity of the image and trace on that new layer.

Just as we talked about in this article, you can start tracing within a matter of seconds. Put on some music and trace everything that you need. If it doesn’t make sense for you to trace don’t do it.

For example, I don’t need to draw every single hair in order to know where the eyebrows are. I do need to trace the shape of the eyebrows.

How to trace a face in Procreate

Tracing a face in Procreate is very simple. It has the same workflow as if you were to trace any other subject. Use the website Pexels to get free-to-use Portrait reference images.

To trace a face in Procreate you:

When tracing a portrait, you mainly want to focus on tracing the features. Make sure to capture the outlines of the eyes, nose and lips.

The hair can be captured by drawing the outline of the shape of the hairdo. There’s no need to draw every single hair or fly away.

You might want to draw the outlines of the shadows as well. Use a different size brush for this to differentiate between features and shadows.

The (rather terrifying) traced outline of a woman smiling above was done with one brush. The thicker lines are the most prominent outlines. The thinner lines represent the shadows.

It’s important to, when you draw or paint the rest of the artwork, disregard the lines and use them as guidelines instead. There’s no such thing as harsh lines in real-life, just values.

Mystery solved: the important difference between violet and purple

How to turn grayscale to color Procreate for beginners2022

Hue vs color: the most important difference explained